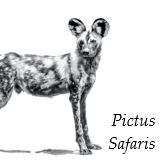 By Pictus Safaris
November 19, 2020 in Mozambique