Botswana Savuti Lions kill an elephant in the night, they feed on it during sunrise at Harvey's pan. 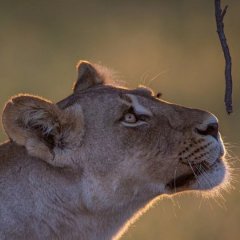